Persona 4, Sexuality, and the Illusion of Choice

Recently, I dusted off my Playstation 3 and decided to try and work through my somewhat extensive backlog. I decided to beat Final Fantasy XIII first. Afterward, I still had that Japanese RPG itch, so next I fired up Persona 4. For those not in the know, Persona 4 was one of the last great games to come out for the Playstation 2. It follows an unnamed protagonist who moves to the small Japanese town of Inaba to live with his uncle for a year.

The protagonist quickly makes friends at his high school and learns of a rumor that if you watch a television that is switched off at midnight on a rainy night, you'll see who you're destined to be with. In a series of events, the protagonist and friends learn that this actually a look into another world inside of the TV. The person depicted in the TV is actually trapped there, and if they stay too long, they will die, killed by their most secret desires and feelings made manifest in a shadow version of themselves. Cue the protagonist and his friends banding together to try to save the people trapped in the TV, whilst also trying to figure who is throwing them in and why.

One of the first characters you save is a boy named Kanji Tatsumi. Kanji is the typical high school punk: doesn't take guff from anyone, yells a lot, likes to get in fights, wears lots of black, etc. etc. etc. His shadow version, however, is quite different. The “dungeon” where Kanji is trapped takes the form of a steamy bathhouse, and from confrontations with Shadow Kanji (who is only wearing a towel, by the by), you learn that Kanji's deep dark secret is that he's gay. Or that's what signs point to, anyway, considering that Shadow Kanji talks about finding the right man and sports a stereotypical lisp and high, lilting voice.

Kanji's confrontation with his shadow self ends like most others; he denies his dark secret, giving his shadow version power and allowing it to transform into a monster. Shadow Kanji's boss form is...interesting, to say the least: 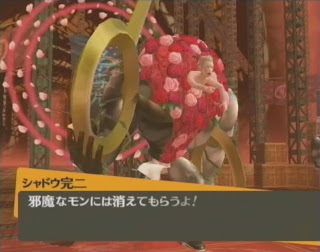 For those who can't tell, that's a large muscular man with a mane of roses wearing a towel, and holding two giant, golden male symbols. Oh yeah, and he's flanked by two other large, muscular men.

Now, other shadow bosses you fight are also over-the-top, but not to this extent. The worst part, however, is after the fight. One of your other party members, Yosuke, starts acting pretty homophobic towards Kanji starting almost immediately after the fight. The worst of this happens later, when your party of characters goes to an outdoor education camp. Kanji hangs out in the boys' tent with the protagonist and Yosuke, the latter of whom goes so far as to say something along the lines of “Are you sure we can be safe sleeping next to you?” Yes folks, classy implied rape jokes!

On top of this, Kanji remarks a couple of times that his real deep dark secret is that he's just afraid of rejection. Any efforts to bring up his sexuality, positive or negative, is met with anger.

All in all, the whole thing is dealt with very poorly and ended up with me feeling uncomfortable every time Kanji's sexuality was brought into question.

This leads to the second topic I wanted to discuss. During the outdoor education segment while Yosuke is berating Kanji, not once am I able to step in as the protagonist and put a stop to the events. Throughout the game, you can respond to questions and events in a Dragon Age style of several different responses/emotions represented. However, I'm not offered the opportunity this time. I have to stand by and watch this happen.

The topics of sexuality and choice extend beyond the game world. In the official strategy guide for Persona 4, published by DoubleJump Books, there is a section that sports an interview where fans asked Atlus, the game creators, questions about the game. I picked out two choice questions and answers:

“jayroo: Looking to the past, specifically [the Shin Megami Tensei series]; will you ever create dual leads for the player to choose from again? Specifically a male or female character?

Atlus: Given the idea that 'the main character is the player' in the Megaten series, we understand that the option of selecting your gender is something we should consider in the future.

Atlus: Is the first question in reference to Jun Kurosu in Persona 2? We created that scene as an experiment to see how the players would react to this particular scenario. There is a subculture within female Japanese fans of anime and comics where they value relationships between fictional male characters, in a different way than in real-life gay culture. We were wondering if we could satisfy those fans.

In regards to the second question, we have no plans to do so at the moment, but we cannot rule out the possibility. However, there won't be a case where that becomes the principal axis of the game.”

Now wait just a minute here. In one question, Atlus states “the main character is the player.” In another, it denies a group of players for no reason. Not to mention the fact that they had a same-sex relationship in a previous game to satisfy “a subculture within female Japanese fans” rather than...you know, actual gay players. It also begs the question: Why? What possible reason is there to limit the amount of interactivity within a game? Consider also that if a future game were to have a male and female protagonist, one assumes that Atlus would put relationships into the game for both genders. Why not allow all relationships to all characters?

I would like to assume ignorance of a playerbase rather than outright hostility on Atlus' behalf, and given their response, it seems like they just haven't thought about it. Honestly, though, while being overlooked is better than being discriminated against, it's still frustrating, especially when the creators of a game went as far as to make a gay (or “gay”) character, even if they didn't do too well creating said character.

My hope for going forward is that Atlus realizes that there is a community of gay players that would appreciate being recognized and catered to. As it stands, Kanji serves as more of a butt of a joke than a well-written character who is trying to come to grips with his sexuality. It would also be nice to feel like I could actually interact with the events of the story and change it somehow. I feel that a company like Atlus can do better.
Posted by Bryce at 6:03 PM